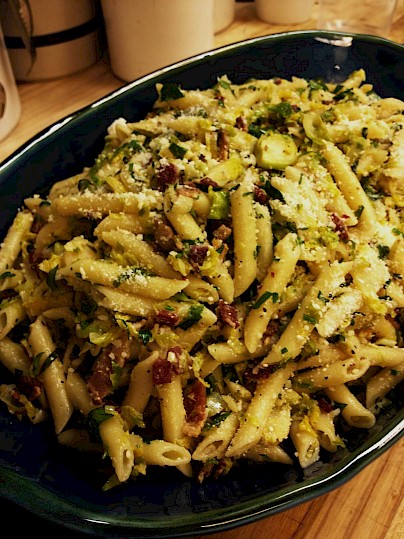 additional salt and pepper to taste

Clean and slice the Brussels Sprouts by removing the hard bottom core. Cut the sprouts in half lengthwise, then finely slice to resemble slaw and set aside. Cut the bacon into quarter-inch pieces, set aside.

Cook the pasta according to the package directions. Reserve 1 cup of the pasta water, them drain pasta into a colander (do not rinse). Set the hot pasta in a large bowl, set aside.

While pasta is cooking, cook the bacon in a large skillet on medium-high heat. Render out the fat from the bacon until the bacon is almost crispy. Remove bacon from pan then pour fat in a bowl.

In the same pan, return the bacon and 2 Tbsp. bacon fat. Sauté on high heat with the diced onions, Brussels sprouts, salt and pepper. Use as much pasta water as needed (start with ½ a cup) to help de-glaze the brown bits from the bottom of the pan.

Once the Brussels sprouts are cooked through (3-5 minutes) pour the mixture into the same bowl with the pasta. Toss the Brussels Sprout mixture and pasta with the Parmesan and parsley, add hot pepper flakes and additional salt and pepper to taste.