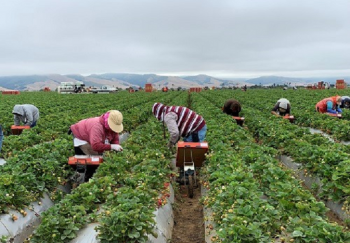 The legislation was crafted over a period of months with a core group of bipartisan supporters, and garnered 34 Republican votes. It still faced Republican opposition: of the 165 votes against it, 161 were cast by Republicans. The final vote was 260-165; three Democrats dissenting.

The legislation now goes to the Senate, where it faces larger obstacles, and will face final approval by President Trump if it advances, as noted by a statement from Western Growers President and CEO Tom Nassif. Western Growers was involved in the process that led to its introduction by House members.

“Both the Senate and President Trump must be willing to take the political stand that is required to ensure the continued production of an abundant, safe and affordable domestic food supply,” Nassif said in the statement. “Our farmers are depending on the present actions of Congress and the administration to make possible the future viability of the agriculture industry.”

The bill revises the H-2A agworker program and provides growers with a more reliable labor outlook by securing temporary status for workers, with the possibility for a permanent residency in the U.S.

The United Fresh Produce Association said H-2A reforms are much needed, allowing participants to work on a year-round basis instead of seasonal, and addresses rising wage mandates for participation.

“For too long, the fresh produce industry has suffered under a system that fails to meet the labor needs of our industry,” United Fresh President and CEO Tom Stenzel said in a statement. “Passage of this legislation represents an important step in ending decades of uncertainty for growers of fresh fruits and vegetables.”

United Fresh has a dedicated webpage on the legislation, with ways to continue support in the Senate.

Jim Bair, president and CEO of the U.S. Apple Association, joined other produce industry groups in commending the act’s authors, Reps. Zoe Lofgren, D-Calif., and Dan Newhouse, R-Wash., and its supporters in Congress.

The apple industry is labor-intensive and the apple association has been a longtime advocate of solutions to the problem, Bair said.

In California, hurdles to a reliable workforce threaten the $50 billion in agriculture production value, according to the California Fresh Fruit Association, Fresno, which said the Dec. 11 vote gives the industry some optimism.

“There is no doubt the agricultural industry has waited many years for an immigration reform bill to address the labor concerns amongst the many different commodities produced here domestically so that it can continue to provide the nation and world with safe and reliable food supply long into the future,” CFFA President Ian LeMay said in a statement.

“H.R. 5038 demonstrates that bipartisanship still exists, that when faced with a common challenge we can still rise to the occasion and do the right thing,” according to his statement.