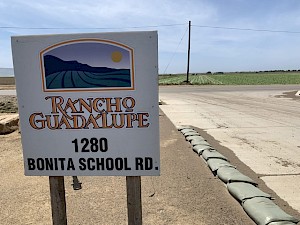 SANTA MARIA, Calif. -- This has been an incredibly challenging time for many farmers. While food deliveries to grocery stores are going strong, farmers who sell their product to food services have more produce to pick then they can sell.

The General Manager of Rancho Guadalupe Farms says it's the greatest challenge he's faced in the farming industry.

"Without question," A.J. Cisney said. "There is just nothing that compares to this."

A meaningful percentage of the produce grown at Rancho Guadalupe Farms goes to food services like restaurants, hotels, and large events that have not happened for nearly two months.

"When the shelter order was put in place in March we already had all of our product planted for all of April and all of May, and a little bit into early June," Cisney said.

Now it's harvest time, and there is no place for much of the produce to go.

"We've walked over lots of acres of lettuce. That's probably the one that's been hit the most," Cisney said.

The demand for fresh produce has shifted to food banks. Rancho Guadalupe has partnered with Alameda County Food Banks for a pilot program to get them food at a fair price.

Alameda County Spokesperson Teresa Drenick called it, "A rapid fire coming together of the county and the farmers."

In Alameda County the food banks have seen a one thousand percent increase in people needing food assistance. In what they're calling an innovative partnership, the county purchased strawberries and broccoli directly from Rancho Guadalupe and other farms at the cost it takes them to produce it.

"We think it's really important to support the farmers and at the same time support the needs of our community members," Drenick said.

The first shipment of strawberries and broccoli left from Santa Maria to Alameda County last week. A second shipment of broccoli is set to be delivered Wednesday.

Alameda County calls it a win-win, and Cisney says it may be the best way to get people food who need it most, while keeping agriculture whole.

"What we're really looking for is help at the state level and at the Federal level to get some funding into the larger distribution network," Cisney said.

The Rancho Guadalupe General Manager said it's important to keep the supply chain in tact. Cisney hopes to see this pilot program expanded into the larger state network of food banks.